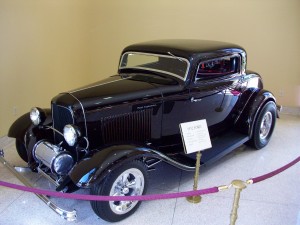 I think I may have worn out my digital camera taking pictures of the McGee Roadster. But more on that later. After my normal morning routine, and a quick breakfast it was back in the road and into the cool crisp SoCal morning. The weather at 8am here is about 70 degrees with a light breeze – ever breezier in an open car. First stop of the day – The Nethercutt Collection. This is in an incredible museum, located in Sylmar California just North of downtown LA, featuring the collection of Mr. Nethercutt – founder of Merle Norman cosmetics. Every aspect of this facility is top notch – the buildings are incredible, and the cars are even better.

As we topped the stairs and Max swung open the regal front doors of the building, the first words out of his mouth were, “this is a good sign” – what was staring at us from the main reception area and lobby? None other than the Pierson Brothers Coupe and the Doyle Gammell coupe. The Pierson car needs no introduction, but the Gammell coupe is not quite as famous; but was on Ford Motor Company’s list of the “75 Most Influential 1932 Fords” for the 75th birthday of the Deuce. Also in the building – the McGee roadster. This could be by favorite car of all time – period – but is easily my favorite ‘32 Ford by far. I took about 100 pictures of every detail on this car. It was so awesome to be able to get that close to this car, with no one around and literally document every inch of it with photos. At one point, I was laying on the floor taking pictures of the K-member, and one of the collection’s curators stopped by to inquire as to exactly what I was doing. After about a ten minute conversation, he realized I knew way more about that car than he did, and left me to my photo documentary work with a smile on his face. Awesome guy. 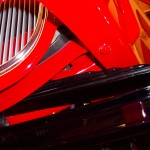 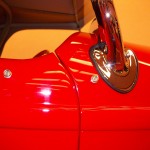 After we pulled out of the Nethercutt, Max wanted to backtrack up a side street we took on the way to the museum, as we had spotted a house with some wild looking cactus in the front yard. When we pulled up to the house to take a picture, I noticed that there was a block wall in front of the house, but behind it there looked to be hundreds more HUGE cacti! We jumped out and walked up the driveway, to find one of the most incredible, undiscovered sights in SoCal – a 50 year old cactus farm, that has been surrounded by developement and housing. The gentlemen on the property was leasing some space from the owner, and gave us the grand tour of the facility. Aside from growing various types of cacti, the recently passed owner was also an artist, sculptor, and collector of everyting from vintage padlocks to toy airplanes. We spent only 30 minutes or so there, but it was very interesting – one of those things you just accidentally stumble across, and then proceeds to absolutely blow your mind. They sell cacti, ranging in price from $300 to $15,000. I need to looking into farming………..

Back on the road – headed to Hollywood. There is a new generation of hot rod builder on the rise – we visited with Jimmy White of Circle City yesterday, and today, we called on Hollywood Hot Rods and the Old Crow Speed Shop. Troy Ladd is the driving force behind HHR, and is one of the top young builders in the country. His own personal roadster, the bright orange ‘32(which many people believe should be wearing the ‘07 AMBR crown) was pulled up in the front door of the shop. It is so awesome to see cars with this level of craftsmanship being driven. In the year or more since this car has been complete, you can see some wear on the driver’s seat, and couple repaired paint chips in the usual highboy places. As I leaned over the passenger side of the car to snap a couple of pictures, I reached down and felt the outside header – slightly warm – I like where Troy’s head is at – a beautiful SoCal day – driving a beautiful roadster. Lots of cool projects at HHR – the one that caught most of my attention was a little Model A, with a flathead, running a pair of the new reproduction Ardun heads, and a full torsion bar suspension engineered and built by Steve Moal. This car is being built for an upcoming Mexican Road Race – Doane Spencer would be so into this rig….right up his alley. 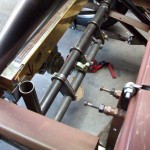 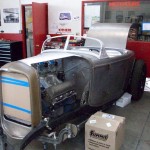 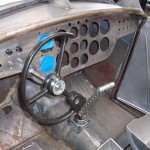 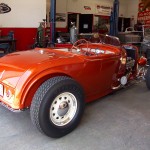 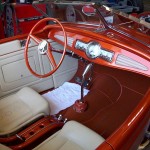 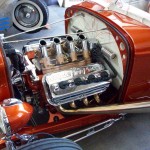 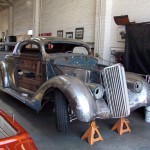 Right next door – literally – is the Old Crow Speed Shop. We walked around the corner and met up with Lucky. The owner Bobby Green was out today, but we chilled with Lucky and looked over some shop projects, belly tankers and swapped some interesting Bonneville stories. Amidst our conversation, I realized that the Old Crow Bellytanker featured recently in The Rodder’s Journal was no there, after asking Lucky, he told us that the tanker was on board a ship, making its way home from Amsterdam. The Netherlands?  Well, more backstory developed, and after all this is Los Angeles guys – , Tommy Hilfiger used all three Old Crow tankers in a recent advertising campaign for the summer of ‘08. They took the tanker back to Amsterdam to the Hilfiger headquarters for the summer fashion season runway event. He showed us some of the still shots of the cars at Bonneville with the fashion models draped over the cars and posing with the tankers in the background….I guess this makes it official, Dry lakes racing has gone Hollywood.

You can watch a quick trailer of the Hilfiger footage here 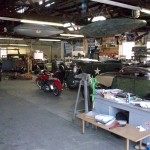 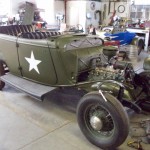 As you can image, a very busy day burning up the LA freeways – one last stop for the day in Duarte, at the world famous Justice Brothers Museum. When I cracked the front door open, I was welcomed by that sweet, sweet smell of nitromethane. It is like it reached out and grabbed my nose to say, “WELCOME!” This eclectic collection, housed at the headquarters of the JB Automotive group, features a stout collection of early midget, sprint cars and drag cars. I spotted more Offy powered cars in that place than I could keep track of. We looked over all the race cars, then made our way across the street to phase 2 of the museum – what did I first notice? I stocker Deuce roadster looking like the day it rolled off the assemlby line. And right next door? a ‘33 Phaeton with less than 900 miles on the clock. Original and unrestored. I just could not get enough of these two cars. I could no resist opening the driver’s door on the roadster. The door jambs were spotless, and the doors clicked closed better than a new Toyota Camry. 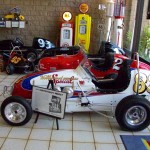 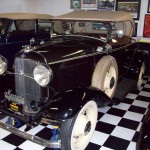 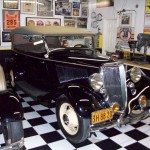 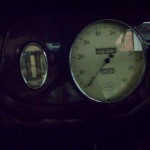 A long day on the road – but arriving back at the hotel, finally some hot rods in the parking lot! A trio of ‘30-31 roadster pickups and a ‘32 roadster pulled in from Nevada today – Tommorrow it is going to start getting hectic – and I’ll keep you all up to date on the happenings…..