My second day in SoCal started off with us setting out on the 57 freeway today heading to Boyd’s in La Habra. As some of you may or may not know, Boyd Coddington passed away recently, and has left is shop in the hands of his wife Jo, and the competent staff that has turned out some great cars over the years. When we walked in the door, it just felt odd. Generally there are cars jammed in the show room area, present projects, past projects and cool cars for sale. Today, only a ’29 roadster pickup, the pink ’55 Cadillac built for Reese’s candy company, and the Whatthehey. That car is an incredible example of workmanship. We spend a little amount of time at Boyd’s, just taking it in, and observing the memorabilia on the walls…it just felt like we should be there, like we were paying our respects to him; or maybe just the idea of him that was no longer there. It is one thing I cannot describe.

Just around the corner from Boyd’s was Kugel Komponents. Jerry Kugel has been an innovator in the world of independent front and rear suspensions for decades. We pulled up at the shop the roadster and staring back as us just inside the door was an awesome restored Fordor; and its neighbor in the shop, was a stripped bare Tudor…not so much as a pinhole in the sheetmetal. Also of interest, as I mentioned yesterday at Scandinavian, apparently every hot rod shop in SoCal has a gennie ’32 chassis sitting up on a shelf in the shop!

The next stop was LimeWorks in Whittier. On the way, we began discussing possible names for Max’s green roadster – he had suggested Vamos Verde – “go green”. I stewed on that for two days, and out of the blue riding up the 5, I blurted out Chile Verde. I think it has stuck. If any you have heard my propensity to rename people’s dogs at will, you know that my naming of things is pretty spot on. Chile Verde will stick.

When we arrived at Limeworks, we turned of off Greenleaf and slid around the back and pulled in the back door via the alley. We were immediately greeted by Limey Steve and the crew. Funny, a green car was a hit with a shop that has the word “lime” in the name – who would have thought. After spending some time going over our ride with them, we went inside to check out what they were working on. An awesome deep maroom roadster was hanging out the back door, unsplit bone, dropped ’32 axle, flathead with early speed equipment, closed drive – nice car. Also, was a new ’32 pickup that the guys told us they litterally through together with some parts around the shop – and get this, a $425 Earl Scheib paint job.

After leaving Limeworks, we spun around the block and hit up Moon Speed Equipment. Max wanted to pick up a new air cleaner cover for Chile Verde(see how I cleverly work that into the text so smoothly? it’s sticking). Max had purchased one at this exactly location about 18 years ago, and it had begun to rust. If you are an auto enthusiast of any type, you need to stop in at Moon. Carroll Shelby built the very first AC Cobra in one of the bays of that building. Just an incredible landmark in the car culture.

Now onto Circle City Hot Rods in Orange California. The city of Orange is such a quaint city – buried in the east side of Orange County, it is almost like somehow the effects of urban sprawl simply jumped over this municipality. The architecture, design and feel of Orange is amazing. Nicknamed the “Circle City” for its roundabouts and traffic circles – it seems far away from downtown LA, but is really just right around the corner. We rolled up to meet Jimmy White at the front door of the shop. Jimmy immediately recognized Chile Verde from the Antique Nationals the last Sunday at Fontana. We got the quick and dirty tour – some dialed coupe projects, a ’31 Victoria – going mid-60’s gasser style with a punched out 348 and a 4 speed, nose bleed stance….crazy…I’d gladly signup for that test drive. Also at Circle City was an awesome ’36 3-window; a true survivor late 50’s hot rod – in the shop getting some sheetmetal repair and a drivertrain refresh. An original California car, that was sold back East in the late 60’s, has bow been brought back home to California. Jimmy and crew are going to swap out the early Ford box for a late 4 speed, and open drive, but leaving as much of the car as it was and has been since the late 50’s. Jimmy runs a top notch shop and is truly one of the awesome young talents in the business – www.circlecityhotrods.com

Totally off topic, but the morning began with me hitting the hotel gym at 6am for a little workout, while watching some Sportscenter. Apparently Ken Griffey Jr has now hit 600 HR’s – and they talked about this nearly the entire 30 or 40 mintues I was in there. Words like incredible, outstanding, and even “legendary” were routinely used to describe Mr. Griffeys career – but honestly, has he ever won a World Series? Been a factor on a really great winning team? Isn’t the point of participating in any league or sport to win the championship of your fellow competitors? If a race car driver had a 20 year career, and ended up leading the most laps of any driver ever, but only won a handful of races, and no championships, is that really legendary?

A long day and about 200 miles on the roadster left me with a burnt nose and an empty stomach. After a quick bite to eat – it was all about the Lakers for me. I’ve been an LA fan for a long time, before Kobe, before Shaq – back to a starting five of Nick Van Exel, Eddie Jones, Cedric Ceballos, Elden Campbell, and Vlade Divac anchoring the middle( who can recall that team taking the Spurs to six games in ’95?). But I don’t want to tempt fate so I’m not going into the details of the game. But it was AWESOME. I’ve been to my share of sporting events and partied in many sports towns, but LA fans are nuts! I can’t wait for games 4 & 5 – Its now nearly 11pm pacific here, I am jamming out my blog entry for today – and it is zero hour…..

Morning Traffic on the 57 from Pomona 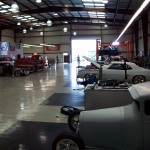 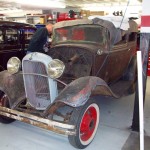 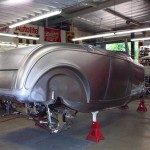 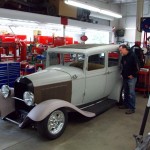 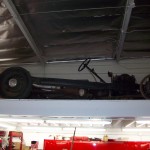 Kugel – Deuce on a Shelf 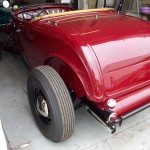 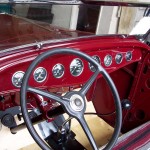 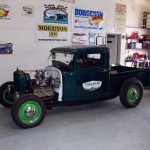 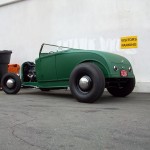 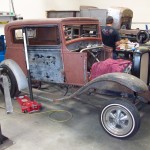 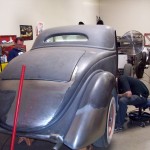 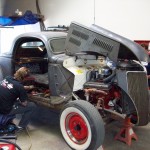 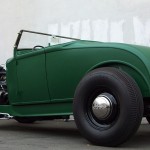