I actually had 2 people ask me at SoCal’s open house tonight why I didn’t post Day 4. I’ve become a quasi-celebrity…. In LA, the land of celebrity –  How big must I be in Omaha at this point?

OK sports fans – two reasons for no blog last night – first and foremost, the Lakers lost. I was pretty upset by that. They had a 24 point lead at one point in the first half, and the pissed it all away. I really like Kobe, but honestly, if you put Ray Allen on a 29 year old Jordan, MJ would get 50+every night. And probably 12 assists and about 7 rebounds. The second reason for no blog is no internet service at the hotel. I was going to write something brief after returning to the hotel from the game…..but I could not get access. I posted on the HAMB from my phone…but I am certainly not going to type a 2000 word blog entry on my tiny querty keyboard on the HTC smartphone.

So let me rewind to Thursday – first event of the day was repairing the lights on on Chile Verde. That name is officially stuck by the way. For some crazy reason, we had no turn signals when the head lamps were on, and when the head lamps were on, the rear bulbs had the brake lights illuminated – not the tail lamps. I spent about an hour on the phone with the tech guys at EZ wiring – and we chased it all down – apparently we have a short somewhere, but short(no pun intended) of pulling the harness out of the rear of the chassis, we decided to live with the lack of signals at night and press through the event as is.

After repairing the signals, we headed over to the Kennedy Brothers Bomb Factory.I really like these guys – they love traditional hot rods, completely independent of the 1950’s culture. They are just a couple of SoCal surfers that like old Fords. I totally identify with these guys. I recently attended an event in Florida, hosted by one of the local clubs, and I just can’t get into the rockabilly/greaser lifestyle…wth girls tatt’ed up trying to emulate pinup models…I don’t get it…and I’m not wearing a costume to enjoy my hot rod.

Sinatra and Davinci (the Italian Greyhound guard dogs) greeted me at the front gate. As previously mentioned, I tend to rename people’s dogs – but these guy’s names are spot on – much like the cars thatJoe & Jay build. Lots of cool stuff going on at the Kennedys – they were thrashing on a ’36 panel to take their product to the swap meet – very cool – they were also putting the final touches on a ’34 chassis for a phaeton body. These guys know how to build a car – dead nuts correct to the exactly time period you want. 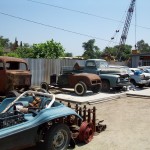 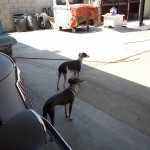 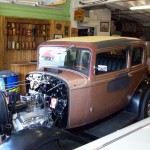 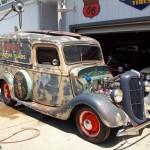 Next stop – Limeworks open house! Steve and company had a great gathering at t

there place Thursday afternoon and into the evening – we rolled out to Whittier at about 1-ish. When we pulled into the parking lot adjacent to their shop, I first noticed a slick ’29 on Deuce rails. This car was spot on – flatmotor, closed drive, early Ford brakes, perfect patina, dropped Ford axle…. All the right stuff. We had visited Steve and company earlier in the week on Tuesday, and not much had changed with regards to the projects at hand – so nothing to really report there – except that the chocolate chip cookies were very soft…………. 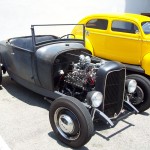 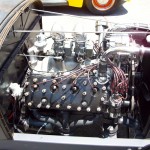 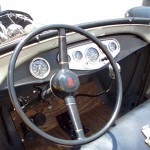 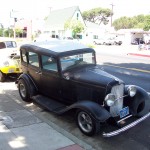 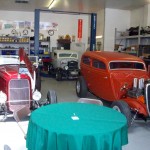 While at Limeworks, we met a gentlemen, who wished to remain anonymous, who shared with us that he knew of a private collection of cars and related automobilia down in Fullerton. He made us swear to a very high level of secrecy that we would never disclose the exactly location, name or phone number of the collection. That being said, the address is 19931 W. Imperial,Fullerton CA 91583.

This is an incredible collection of cars, vintage tools, gas station signage, old toys, etc, etc. I took several pictures, but they really do not capture the scope of this place. This guy has roadster bodies hanging from the rafters – cherry ’32 firewalls, ’32 front fenders that look as if they were pulled from the assembly line just after passing through the paint shop. 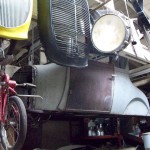 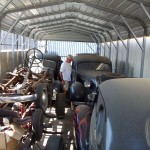 After this long day, I was in rush to get back to the hotel, shower and get off the game. Did I mention that MJ would go off on James Posey for 60+ at age 29? I hate basketball.

So let spare uncle Tim the pain of reliving that agony and move on to Friday. Friday for me began at 3:30 AM. We loaded up and headed out to the swap meet to get in line and wait for the gates to open at 9 AM. That is right…. And 5 and half hour wait to get into the swap meet. Actually more than that, we didn’t roll through the gates until about 10am – so a six+ hour morning of commencing to begin to get ready to start setting up the swap meet space. That is nuts. The fellow vendors are out searching through everyone else’s crap with flashlights Max & Bob sold quite a bit of items before dawn, some of the items being items that you definitely want to have a good look at in the light of day – but I guess these guys were desperate for those parts…. I know I would not pay 4 figures for Deuce fenders with only a AA flashlight’s view of them.

Tons of cool parts in the swap meet – this is the best place to both buy and sell early Ford parts. Period. I don’t think I will ever desire to attend NSRA events on the east cost any longer, unless it is just an excuse to drive the hot rod on a road trip. I watched people get top dollar for hard to find items, and I personally picked up several pieces for cars I’m working on at very cheap prices…. This is the only swap meet I have ever attended where I saw more ’32 axles, wishbones, grille shells, inserts, k-members,and such for sale….it seemed like every 10 spots or so and I was seeing really primo, desirable ’32 parts. I picked a gennie pair of ’32 tail lamp stands, lights, and tag bracket; they look like they were chromed 40 years ago, awesome patina – $50. You can’t find gennie tail lamp stands anywhere any more. Except at the LA roadster show. 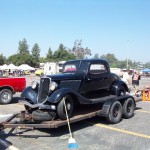 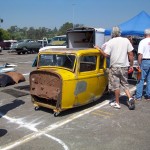 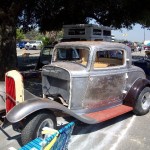 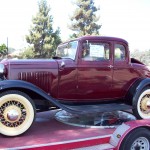 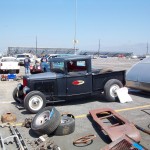 We packed away the goodies and headed out to the hotel for a quick shower, then made our way down to SoCal’s open house. I was at the first one of these about 10 years ago, and it was great – about 200 cars, maybe 500 people, only about a 10 minute wait to get a burger…. But this 2008 version – WOW. SoCal has gone mainstream, not sure if it is the TV show, or just word of mouth, but the shop was slammed. The Pomona PD had 4 full blocks of westbound Grand Ave blocked off to park cars – yes, parking not only curbside, but also the two traffic lanes in front of the shop; so we are talking about 4 blocks of cars, 3 wide, plus cars parked in front of the building, the alleyway between the paint/fab shop and the front building, and around the back of the paint/fab shop. It was a nut house. I noticed at about 2pm at the swap meet, just walking around I overheard at least 20 people saying loudly to there friends, “hey, are we going to SoCal?” or “what time are we going to SoCal” – so I should have known that this event would be off the chart in attendance. As we were leaving I did see a fellow HAMB’ers ’29 RPU, sort of a cream/coffee color… I remembered the pics from the board a while back…it was great to see that in person…pretty dialed. 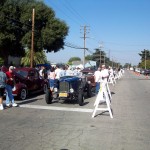 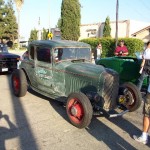 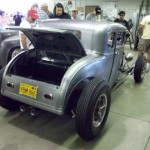 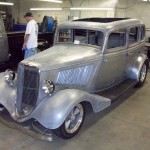 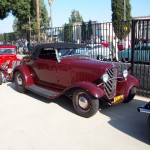 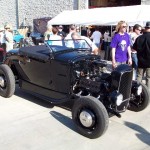 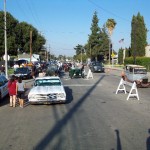 Next stop of the night – Walden’s Speed Shop. Now this is my kind of place. About 50 or so cars at any given time – 200 people max. First things first, I found out that Budweiser is available in a 30 pack in Cali….wow. Nice. Next, as much as I enjoy old cars, I think the real underlying fetish I have is tools. I love tools. My dad always said I was a tool freak – I don’t borrow tools, if I need something, I go buy it. Bobby has every conceivable tool you could ever want. From machine tools, metalshaping tools, jigs, surface tables, etc. etc. His shop has two huge hangar-style tilt out doors that open to the East, exposing the entire shop to the outdoor light. This may be the new blueprint for my new upcoming shop. When we hopped out of the roadster, first thing I noticed was the 3w coupe sitting in the center of the shop. This thing was so nice – Walden is assembling the Brookville coupe bodies in house, on an incredible jig, but they are not just building it stock like B-ville. They are chopping the top 3 ½” and filling the roof with one of their signature Yoder shaped roof inserts. I actually stopped taking pictures of the car, and sat down on the edge of the assembly jig about 20 feet away and stared at the car for 10 minutes while sipping a cold beverage. That body, or that particular car possibly could not be any better. Chop, rake, stance, hood line, proportions. I want one. 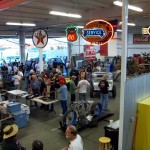 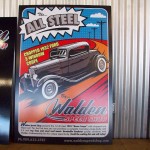 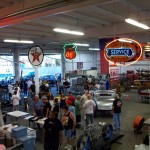 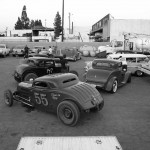 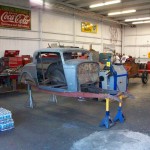 Ok – that is about 20 minutes worth of typing for you all, yes I type fast, i’m sure there is some poor grammar and typos….sorry….. I’ve been up since 3-something AM, I’m going to post this, post the pics and hit the sack – more details tomorrow.