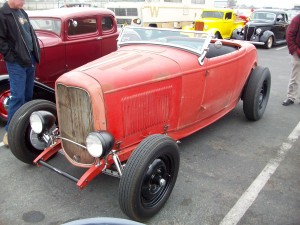 As I’m writing this, the Los Angeles Lakers have just closed out the Magic for the NBA Championship!  Congrats to Phil and the team. I’m a huge basketball fan, and I can’t beileve they rebuilt another team so quickly and won it all….wow…

Today started as just another cool crisp morning in California – after getting some breakfast at the hotel , we were blasting off down “the 10”  to the the 39th annual Antique Nationals at Fontana. I love building hot rods that you can go 80-85 in the left lane on the freeway in – and blowing by the white knuckled 55mph crew in the right lane. PUNCH IT.

At any rate, this is a very cool event, vintage drag racing open to pre ’55 cars of all types. In addition to the racing there is a car show section to park the regular cars in…but hey are far from regular. I have some video from this, I’ll work on getting it up soon, but here are the pictures to hold you over for now…..

Don Dillard was in town in his super-patina’ed green ’32 that was featured in Rodder’s Journal Issue #32 – in case you didn’t know, Don was side swiped in that car a while back and the right front of the car was smashed up pretty good.  He has it back on the road and the new parts and reparied old parts look about like the first parts – if that makes any sense??

I also have a ton of pics toward the end of a neato black roadster – this car was super sanitary – Ford bodied, chrome unsplit bone, Dago axle that was fully polished with the webs corrected and squared off – the axle was not only beautiful for a Dago, but just beautiful period. Flat-motor with a Scot blower, Cyclone quicky….

We stopped by Bob’s Big Boy on the way home late in the afternoon, the best part of the stop was the patty melt on rye…..and a ’36 Convertible pickup.

Odometer update – 542 miles….light day….we were at the drags all day.

UPDATE: Videos added at the bottom of the pictures…..

My neighbor in the parking lot…tasty

Old Junk heads for sale in the swap area

This is NOT the Elmer/Jard/White car….

The 3w that pulls wheelies – search it on YouTube

This thing was FAST…ran 11’s coasting throught the end

GASP – a 327 squeezed in that narrow little T hood!

This rig was Dialed…

did I say stock? what is in there P-Wood?